Today, Copperhead is excited to release our Android 11 update as we proudly strive to remain at the forefront of secure Android development. Android 11 brings with it a host of new features contributed by Google, Copperhead and the greater Android community.

Copperhead continues to improve Android for the benefit of all

Each new official Android version sees Google up-streaming more features which CopperheadOS has showcased for more than two years. A key example of this is the growing use of only while in-use permissions. These features allow users to grant Apps permission to use the camera, microphone, or location features while actively using that App. While the broader Android community grows stronger together, Copperhead will continue to lead the way with privacy and security innovations.

As outlined by Google's system hardening blog, Android continues to expand on known security features while also including features from the development community. There are notable inclusions in Android 11's hardening from CopperheadOS, such as changes to initializing memory, which we've maintained and implemented for years.

Protect your data with regular backups

The release of Android 11 coincides with Copperhead's full integration of the Seedvault app for Encrypted Backup and Restore. Copperhead was one of the first AOSP-based commercial entities to include Seedvault in our releases and we're proud of how far that project has come.

Visit our Youtube for a walk-through of taking an encrypted backup and restoring it using Seedvault. 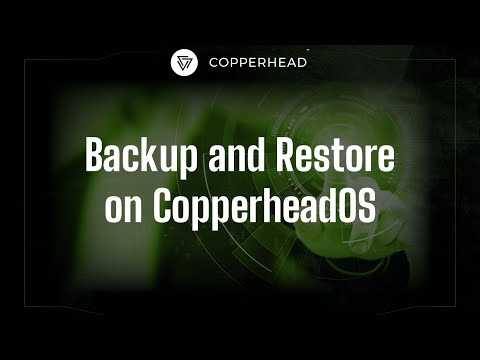 Meanwhile, Google has not remained a sleeping giant. Android 11 is Google’s most user oriented release to date, making improvements in usability by leaps and bounds. Users will take quick notice of smoother transitions, easier to follow menus and customization options to exhaust even the most critical enthusiast.

Bubbles have come to CopperheadOS. Separating messages and notifications per app, bubbles allow users to better manage, see, and understand their expanded notifications at a glance. Users can manage Bubbles and view their Notification history by opening Settings -> Apps and Notifications -> Notifications.