The PaX project provides many exploit mitigation features to harden the Linux kernel far beyond the baseline security features provided by upstream. Android is close enough to a normal Linux distribution for it to work quite well out-of-the-box after doing some kernel porting work, but there are unique issues necessitating deeper integration work to achieve similar benefits to PaX on a more typical distribution.

Reading the last article on the state of address-space layout randomization on Android is recommended but not strictly necessary. The relevant bits will be linked back to as appropriate.

PaX's kernel self-protection features break a fair bit of kernel code and require changes throughout the kernel source tree. Since each Android device has a custom kernel with out-of-tree drivers, leveraging some features can be painful. Fixing the common compatibility issues is very straightforward because the error messages point directly to the problem.

In many cases compatibility issues exist because real bugs are detected rather than remaining undetected. However, on Android these issues are almost always fixed in mainline and simply weren't backported to either the upstream long-term support (LTS) branches, Google's baseline Android kernels derived from upstream (but without any real world device support) or the per-device kernels based upon those. For example, PaX's USERCOPY feature was broken by the incorrect implementation of virt_addr_valid on ARM in the 3.4 kernels used on most Android devices. PaX now includes a backport of this fix in the 3.2 LTS patch, so a fresh port of the LTS fixes to 3.4 wouldn't hit this.

The common causes of issues in the out-of-tree drivers are false positive reference count overflows (PAX_REFCOUNT) requiring more atomic integer fields marked as unchecked, false positive size overflows (PAX_SIZE_OVERFLOW) detected at runtime by the GCC plugin requiring parameters to be marked as permitting overflow and data structures that are automatically constified by the constify plugin (PAX_CONSTIFY_PLUGIN) which need to be marked as non-constant.

In addition to the many kernel self-protection features, PaX hardens userspace code against exploitation. In the kernel, incompatibilities with the hardening features can be fixed or worked around internally. Userspace code runs into similar issues so PaX supports an exception system for toggling hardening features on and off for specific executables. The modern method for doing this is via extended attributes rather than modifying the executables, and this works fine on Android's ext4 and f2fs filesystems.

PaX's MPROTECT feature prevents executable code from being modified or created at runtime. This prevents processes from making themselves vulnerable by creating executable code at runtime. It also prevents an attacker from escalating to generating their own code after hijacking the existing code and/or data via techniques like return-oriented programming. A notable hole in the protection is that files can be mapped as executable so that things like libraries still work, so it works best when combined with a solid mandatory access control policy.

In practice, the main benefit is enforcing a policy of no runtime code generation so that each violation can be investigated and ideally fixed rather than just adding exceptions.

SELinux has a set of features that's quite similar to PaX's MPROTECT: execheap, execstack, execmem and execmod. However, Android has blanket exceptions in the SELinux policy turning off execmem nearly everywhere. This was necessary to take advantage of Dalvik's optional just-in-time (JIT) compilation and may be necessary if the new Android runtime ever moves away from the currently pure ahead-of-time compilation model. Applications could be handled quite easily upstream by implicitly adding the permission to all applications using the old API Level and letting time take care of the rest.

Android used the migration to 64-bit architectures as an opportunity to drop many legacy features from the ABI. Among these changes was dropping support for text relocations in Bionic's linker. The linker now considers text relocations in ELF binaries to be fatal errors on 64-bit architectures. On 32-bit, it has produced a warning for quite some time but application developers can and will just ignore this. The change on 64-bit forced projects like FFmpeg and VLC to deal with this in their ARMv8-A code, but the problems remain on 32-bit. There was an attempt to remove it on 32-bit but it was reverted. Sadly, Android's main bug tracker is private so the rationale and roadmap can only be guessed.

PaX does have a kernel configuration option for permitting text relocations (PAX_ELFRELOCS), but this reduces the security of the system as a whole. It makes more sense to disable MPROTECT for the very few applications with this bug. Text relocations fall under execmod with the similar SELinux feature, so it's possible to have slightly finer-grained control by disabling MPROTECT and using the SELinux policy to allow only execmod. CopperheadOS could use this to offer finer-grained permissions, but text relocations are almost already purged from Android so it doesn't appear to be worth the added complexity.

The primary cause for PaX MPROTECT (and SELinux execmem) violations is JIT compilation. There's an increasing trend towards generating optimized executable code at runtime for everything from high level languages and regular expressions to rule engines.

On Android, the primary cause is the V8 JavaScript virtual machine in the Chromium-based WebView widget. There are many applications making use of the WebView and enabling JavaScript support. It's commonly used for things like advertisements and poorly integrated embedded images and videos. There are also many WebView-based browser applications and countless applications that are little more than a thin wrapper around an embedded browser for a specific use case like visiting articles from a news feed.

In addition to the WebView, there's also the copy of V8 in Chrome itself and other JavaScript JIT compilers like Firefox's SpiderMonkey. These issues aren't substantially different from how things are on the desktop though.

Android doesn't have any unique problems necessitating more PAGEEXEC exceptions than usual. There aren't any known cases beyond SpiderMonkey.

PaX's implementation of address-space layout randomization can cause compatibility issues and the entire set of features is rolled back to vanilla behavior by turning off RANDMMAP (not just mmap randomization. Unlike the other features, any application requiring an exception from this is certainly buggy as it depends on implementation details.

The primary cause of these issues is the assumption that mmap will make use of the address hint, even though it's very explicitly defined as an ignorable hint when MAP_FIXED isn't used. PaX ignores it because it's commonly used by applications to shoot themselves in the foot with deterministic address space layout. Android's runtime is one example where this proves useful, as was covered in the previous article.

RANDMMAP exceptions are rarely necessary now, and that seems to be especially true on Android. These exceptions are almost always needed for legacy code that's not going to run on Android anyway, so as with PAGEEXEC it hasn't been an issue so far.

Android throws a wrench in the works

PaX's executable-based permission system does work on Android. Executables can be marked with the appropriate user.pax.flags extended attributes as necessary. It needs MPROTECT exceptions for a few services like mediaserver, mm-qcamera-app and mm-qcamera-daemon.

The approach to the problem in CopperheadOS is to leverage Android's existing application permission system for handling the PaX exceptions.

Android permissions are often implemented simply as checks for requests done via interprocess message passing, but it also makes heavy usage of the POSIX permissions system. Each Android application is assigned a unique AID (Android ID), which is a matching uid/gid pair used as the uid and primary gid. Many permissions have their own AIDs, and applications with the permissions run with the corresponding secondary group ids. The purpose of the group ids is that the kernel understands them, so they can be leveraged via POSIX file permissions, SELinux and checks based on group ids that are hard-wired into the kernel by Android. For example, it gates networking support on membership in certain groups much like grsecurity's group-based socket features.

Android's database for the AIDs used by the core system and permissions is hard-wired in a C header file so CopperheadOS extends it with an AID for each PaX exception: pax_no_pageexec, pax_no_mprotect and pax_no_randmmap. It then adds 3 new permissions and maps them to the appropriate groups.

Extending PaX to support this new form of exceptions is surprisingly simple. It checks if the executable is marked with an extended attribute opting in to the permission-based system, and then handles membership in the groups by disabling the corresponding feature.

This model is then used for app_process32, app_process64, dalvikvm32 and dalvikvm64. The result is a finer-grained exception model where the same executable can have different PaX features enabled depending on permissions:

Making use of the new permissions is as simple as adding a line to the AndroidManifest.xml for an application:

and is then part of the permissions granted upon installation: 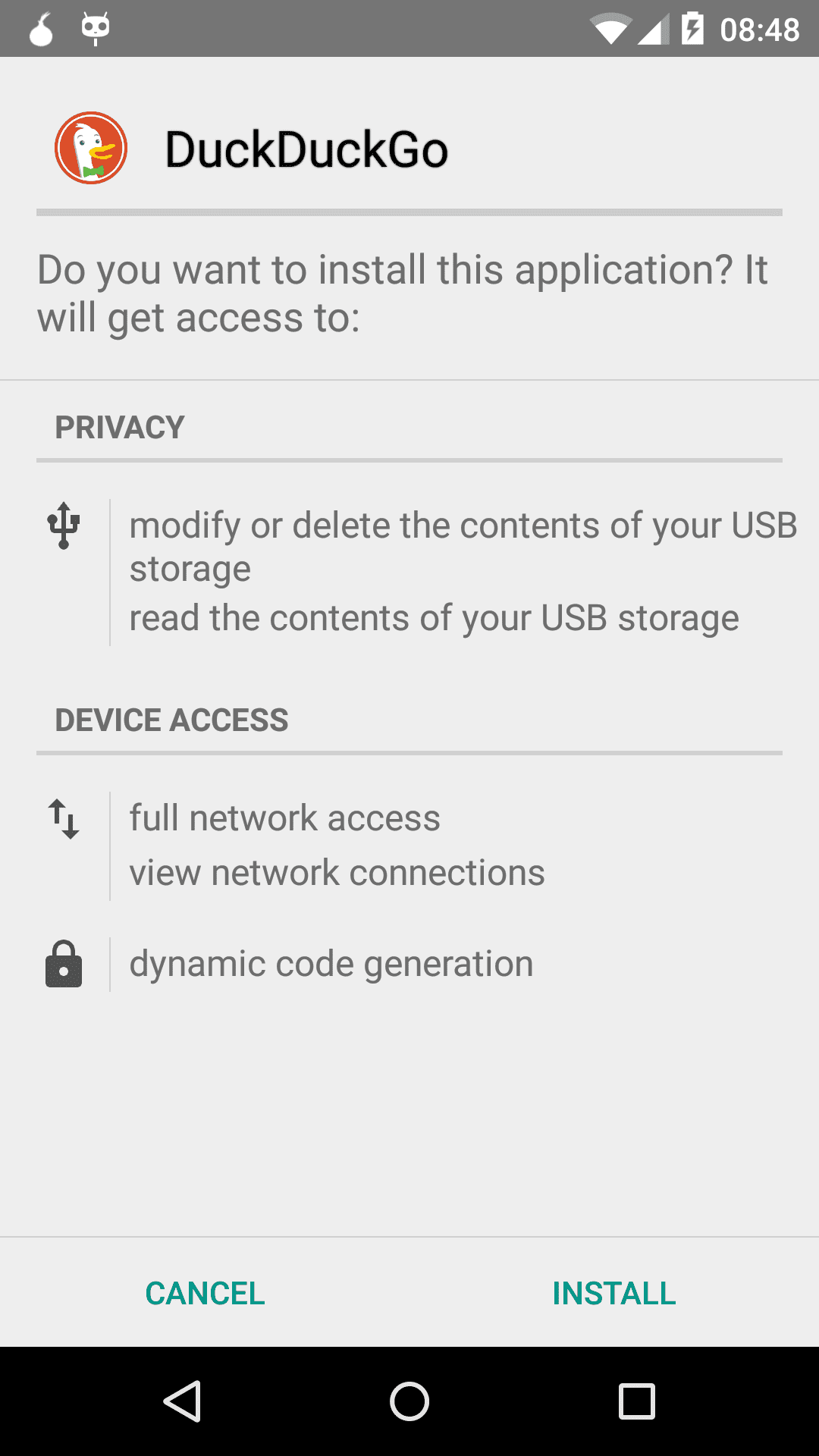 The MPROTECT exception in the list of permissions for DuckDuckGo

Updates to the base system will result in all apps being run through the package manager again, so there's no need to handle new permissions in a special way. Android already has workarounds to deal with split and new permissions, albeit not based on an internal list of applications.